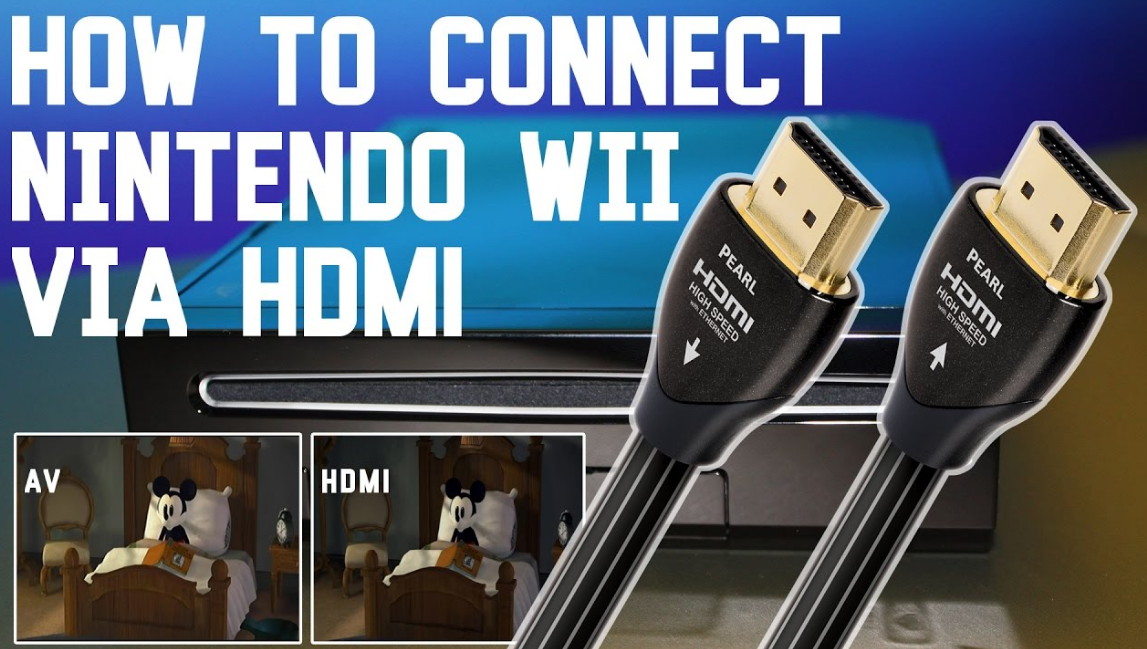 How to hook up wii to smart TV? Your Nintendo Wii is older than your brand-new TV, and it looks as though you can’t connect the two. You’ll have to sacrifice progress on Super Mario Galaxy, or are you missing something?

How to Hook up WII to Smart TV

Your Nintendo Wii is older than your brand-new TV, and it looks as though you can’t connect the two. You’ll have to sacrifice progress on Super Mario Galaxy, or are you missing something?

I don’t have the right TV port for my Wii

You’re concerned that your Nintendo Wii doesn’t have a TV-out option that fits your newly purchased TV. In spite of first impressions, there are several ways to connect the Nintendo Wii to a TV. You can even use a Wii to HDMI converter.

The Wii can be connected to a TV via:

You can connect your Wii to virtually any TV by following the following instructions (intended for HD and HD Ready TVs) if your brand-new TV lacks legacy inputs, or if you have multiple devices vying for the same ports.

Regardless of the solution you choose, you’ll be limited to the Nintendo Wii’s maximum output resolution of 480p.

There was a proprietary cable that came with the Nintendo Wii, the Wii AV Cable. This connects to the Nintendo Wii at one end, and the RCA TV inputs at the other. (Red, white, and yellow correspond to audio and video, respectively.)

By using the TV/Video button on your remote, you can view the Wii once you’ve connected and turned on the console. Can’t find this? Instead, look for Input Select, EXT, AUX, or AV. You can also check channel 00 or 99.

You should only need this brief guide to connect your Nintendo Wii to a smart TV.

S-Video Cables and the Nintendo Wii

S-Video cables can also be used to connect the Nintendo Wii to your TV.

There may also be RCA connectors included, so you can use either depending on your TV. Connect the red and white audio cables to your TV along with the S-Video for S-Video connections. Usually, these are grouped together on the back or side of your TV (or hidden behind a door).

Turn on both the TV and Wii and use your remote control (see above) to locate the signal from your Wii.

Sadly, this option is difficult to source, as S-Video has been retired. You might be able to find a suitable cable on eBay, but not a brand new one.

Connecting the Nintendo Wii to a SCART port

Do you want to use the SCART connector on your TV? If you’re limited to ports, this might be a suitable option. SCART is easily extensible, supporting splitters and switched hubs for multiple connections, much like a USB hub.

SCART to RCA adapters aren’t as common as they once were. You might have received one with your Nintendo Wii. Otherwise, you’ll need to buy a brand-new one.

Once the RCA cable is connected to your TV, you can connect the SCART to the back, change the input mode, and view the SCART channel on your TV.

How to connect the Nintendo Wii to a VGA monitor

With an RCA to VGA breakout cable, you can also connect your Nintendo Wii to a VGA monitor using an adapter. This is particularly useful if your Wii has been relegated to a back room, for instance, or you’re using it as a PC after installing a PC.

Yes, the Wii is one of the devices you can use to install Linux.

Connect the cable to the VGA input on the TV or monitor, then to the RCA cable of your Wii. Turn on the display device, and make sure the input option is set to VGA.

The Nintendo Wii can be connected to the component input ports behind your TV with a component cable for under $10. There are five inputs, two for audio and three for video, which is becoming increasingly rare.

With a device like the one shown, connect the red and white audio jacks to the matching inputs, and the green, blue, and red likewise. If there is no matching color coding on the inputs, look at the labels instead.

For audio, this means red is left, white is right. In video, green is Y, blue is Pb/Cb, and red is Pr/Cr. Connect the cable at both ends and select the correct input mode on your remote control. The TV must have progressive scan enabled in the settings screen before you can view images from the Nintendo Wii.

Additionally, you may need to set the correct screen format.

The component inputs are located next to the RCA inputs, as the red/white audio cables can be used for both. Make sure you plug the cables into the correct ports!

Initially, component cables were the only way to connect the Wii to an HDTV. However, a Wii to HDMI adapter also produces a high-quality image on a smart TV. This is how you can connect your Wii to a TV without using the AV cables.

Just connect one to your Nintendo Wii, hook up an HDMI cable, and plug it into your TV. By using Input Select on your TV remote, you can see what is output on the HDMI channel.

With Wii to HDMI, you can connect your Nintendo Wii to any smart TV via a dedicated Nintendo Wii HDMI adapter.

Although digital audio isn’t available on the Nintendo Wii, you can still get high-quality sound. In addition, mono, stereo, and surround sound-specifically Dolby Pro Logic II-are available, with the latter providing a simulated surround sound ideal for entertainment systems equipped with a surround sound system.

To switch between these options:

The TV you connected your Wii to all those years ago doesn’t matter. Whether you’re using an old TV with SCART or relying on an HDMI converter, you can still connect your Wii to your TV.

Although 480p is the highest quality it can manage, all of your old games will be ready to play.