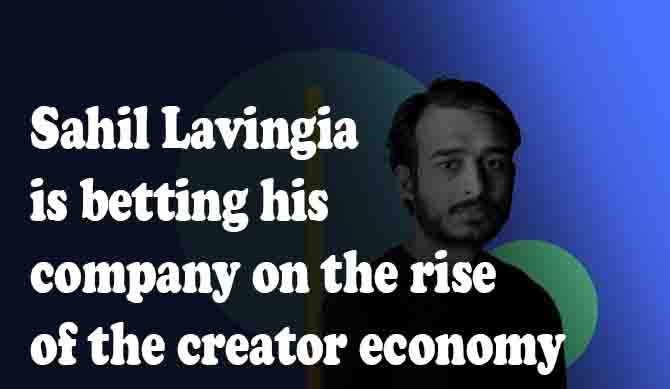 There are several reasons why Sahil Lavingia is betting so much on the rise of the creator economy for his company. In this interview with Gumroad’s CEO, we discuss the company’s first ten years, how Patreon and Substack compete in the marketplace, and how app store “taxes” inhibit the growth of the creator economy.

One of the first things you see when you visit Gumroad’s website is a simple promise that appears at the bottom of the page.

There might not seem to be anything unusual about that promise today. There are a variety of companies that have carved out a niche for themselves in the growing creator economy, from Patreon to Substack to Ko-Fi to Teachable to Cameo, all promising to provide their users with similar services. Gumroad’s story and the beliefs that are guiding its strategy, on the other hand, are a departure from the norm.

Sahil Lavingia was one of the original founders of Gumroad. He left his job at Pinterest in 2011 and surrendered his one-year cliff in order to focus on what he saw as a growing market for creative people to sell their work online. There was no doubt that the next ten years would not be easy. Although the creator economy is now gaining traction, Lavingia wrote a blog about his failure to build a billion-dollar company called “Reflecting on my Failure to Build a Billion-Dollar Company” which discussed how his startup’s rocky history of layoffs, growth spurts, and pressure to fold influenced how he runs his business today. Therefore, Gumroad is not a venture-backed company, but a company that chooses to operate on a loose schedule and flexible hours instead of following the typical venture-backed metrics of success. As Gumroad makes clear to its creators in the introductory pitch, they have the option of quitting their jobs, working at their leisure and getting paid for their services – so why shouldn’t Gumroad do the same for itself?

Due to this philosophy, Gumroad hasn’t been able to become the most popular company in the market. There are several companies that are growing rapidly even though they were formed years after Patreon, Substack, and others were formed. In spite of this, Lavingia is confident that Gumroad’s philosophical approach and the ever-growing creator economy will end up paying off in the long run.

In an interview with the Business of Business, Lavingia discussed his view on what he sees as the future of the creator economy, how Gumroad stacks up against its competitors, and what it will take to make the creator economy grow even faster than it already has.